As an undergraduate, I took two classes taught by my research advisor. That was in the early days of Blackboard. I still like to tell a couple of stories about some of the things he said and taught.

He was inclined to put way too much text on his Powerpoint slides, and then when we would all be frantically trying to scribble down every single word from the slide, he would stand in front of the projector, blocking the beam to try and get us to listen instead to the pearls of wisdom dripping from his mouth (as he put it) rather than mindlessly copying the slides.

Oh, he also wouldn't post his slides on Blackboard for us. Or rather, he would tell us that he wouldn't post the slides, and then often he would relent very shortly before the next exam came up and we would be left scrambling to reconcile our haphazard lecture notes with the slides. He was always pretty clear on why he did these things and his reasoning was reasonable, if annoying.

For some classes, we were also supposed to come prepared with written-out summaries of the journal articles we would discuss during that class period, following a specific format. He would also often threaten to collect up and grade all of our summaries, which was usually sufficient motivation for us to ensure we got them done. He never did collect them up, though.

By this point, it's just amusing to look back on these memories. He was a decent teacher, overall, and I did learn a lot from him, even if some of his methods were annoying at the time. Annoying, but effective, let's note.

In retrospect I wish I could have been one of the students who just stopped taking notes and just sat there, leaned back in the chair with my arms folded, listening. I was never that cool (or foolish).

Especially amusing because right now at this time of the semester it feels like I have students rappelling down the side of the building and crawling through the ductwork to reach my office, morning, noon, and night, to get my specific feedback on their scientific papers, mine and mine only.

This is largely just because I'm the person who gives them grades, never mind my particular philosophy about grades. But it's also because they have come to realize that 5 minutes with the professor can save them 2+ hours of squirming and hand-wringing and head-scratching on their own.

They just can't ever quite fully understand how their 5 minutes multiplies out when there are so many of them, and just one of me.

Time to go feed the crickets. This entry was originally posted at https://rebeccmeister.dreamwidth.org/1421008.html. Please comment there using OpenID.

I haven't even tried to get out on the river at all yet this week.

The best time for recording lecture videos is that golden window from ~4:30 pm until 6:30 pm or later. Friday nights are good for that. Then home, where I am a million times grateful for

scrottie who is keeping me fed and clothed, then either staring at the computer screen or more grading. Wash, rinse, repeat.

When I went into the insect room at the very end of the day on Monday, I discovered that one of the leafcutter ant colonies had chewed through one of the tubes connecting adjacent containers, so there were ants frolicking around everywhere in the secondary containment tray. Could be worse, clearly. I put them back and gave them a huge heap of polenta because they were very hungry.

I need to reply to 8 emails from students who responded to my video about doing research in 2021.

Rowing meetings also. I really hate showing up utterly unprepared and disorganized for meetings I'm supposed to be running. Am coming unglued. Thank goodness for other people who are competent and more with it than me. I still contend I should not be the person in charge, for obvious reasons.

Back to grading. This entry was originally posted at https://rebeccmeister.dreamwidth.org/1420721.html. Please comment there using OpenID.

New cycling jacket, plus Froinlavin helping me out with my commute: 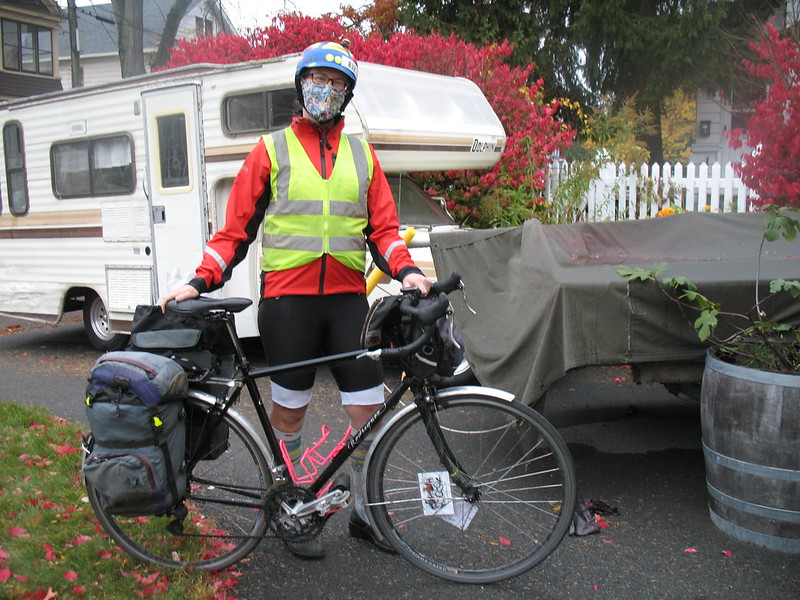 Sinus headache yesterday is not helping me to get work done, argh. Now that it has started raining today I am feeling much better. I also took some allergy drugs.

More grading today, plus hiring committee duties, plus probably a billion and five student meetings, between office hours and advising for spring registration.

My mom says my cousin described this as the Hamster Wheel: run run run, never go anywhere, forget how to get off the wheel. This entry was originally posted at https://rebeccmeister.dreamwidth.org/1420297.html. Please comment there using OpenID.

Finally made a few minutes to update my checkbook register. Apparently the last time I did that was early September.

My major purchases during that timeframe, aside from rent, smart-o-phone, internets, and utilities, fell into the following categories:

-Stuff bought for work - supplies for students that I needed to get on short notice where I eventually threw my hands up in the air and concluded I'd just keep whatever was left over; software and a webcam for recording lectures at home

I keep a text file on my computer's desktop for things to buy. I'm frustrated about it right now.

An academic on the Tweet-machine wrote not too long ago about how helpful it can be to have a microphone set up to monitor for things like Zoom and recording lectures. As time goes on I can see just how helpful it would be. But I just don't feel like it's something I can shop for at the moment, so soon after buying a home webcam, more video editing software for my home computer, and another external hard drive.

I need to shop for things like new sandals, shoes, and socks. My sandals and shoes are literally falling apart and it seems like this is a category of thing where I have a hard time shopping for myself. I am wearing through my wool socks. I'd like to have better shoes for the winter weather here.

Frodo's new rear wheel is not going to be cheap, either. Apparently during the pandemic every yahoo everywhere pulled their old 26" mountain bike back out of the garage, put air in the tires, and decided to tend to all the fixes and upgrades.

I would also like to shop for somewhat frivolous things, like a good stopper/pourer for the olive oil bottle.

And then there's the projector, which needs a new color wheel, and grandpa's waffle iron, which probably needs a new switch. Those are so far beyond my cope right now.

What I will most likely do is continue to limp along until the semester ends. Shopping is almost always an exercise in frustration for me because it almost always requires compromise: buying online and dealing with packaging; buying online from a monopolistic mega-retailer that I'm strongly opposed to; having to go somewhere to shop, not finding what I want.

I would love to be able to just go lurk in a thrift store occasionally, but they just don't seem to exist here in any kind of meaningfully accessible way, as far as I can tell. This entry was originally posted at https://rebeccmeister.dreamwidth.org/1420159.html. Please comment there using OpenID.

Today I am learning that there are a lot of different types of RNA viruses, and more about how they work. Fascinating!

https://en.wikipedia.org/wiki/RNA_virus This entry was originally posted at https://rebeccmeister.dreamwidth.org/1419825.html. Please comment there using OpenID.

We kind of accidentally watched Maiden last night, that documentary film about the first all-woman sailing crew to complete the Whitbread Round the World Race.

THAT was a well-put-together documentary. Excellent storytelling.

Some of the oceans they faced make me shudder.

I loved the soundtrack. I can't seem to find it or I'd consider buying it. Admittedly, I did not look very hard.

And then funny to get up and go rowing on a calm, dead-flat Hudson River this morning, after all of the reminders that it doesn't take much for the ocean to kill a person.

We'd planned to end the season this week, but now there are questions about potentially continuing through next week.

Back to grading. This entry was originally posted at https://rebeccmeister.dreamwidth.org/1419691.html. Please comment there using OpenID.

I just can't get myself to work anymore today.

Time to go get started on cricket care.

Ha. This entry was originally posted at https://rebeccmeister.dreamwidth.org/1419332.html. Please comment there using OpenID.

( Collapse ) This entry was originally posted at https://rebeccmeister.dreamwidth.org/1419019.html. Please comment there using OpenID.

I have so much grading to do.

You know what makes it better?

Listening to KEXP. This entry was originally posted at https://rebeccmeister.dreamwidth.org/1418813.html. Please comment there using OpenID.

Before I get to that: I'm glad to have an excuse to ride Froinlavin around for a while. Riding Froini is bringing back fond memories of PBP. Froinlavin has carried me so far, through so much.

Here are some photos of Frodo's poor rear bike wheel: 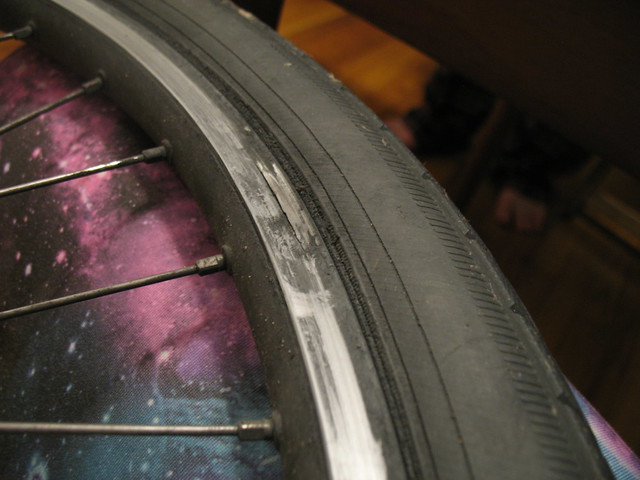 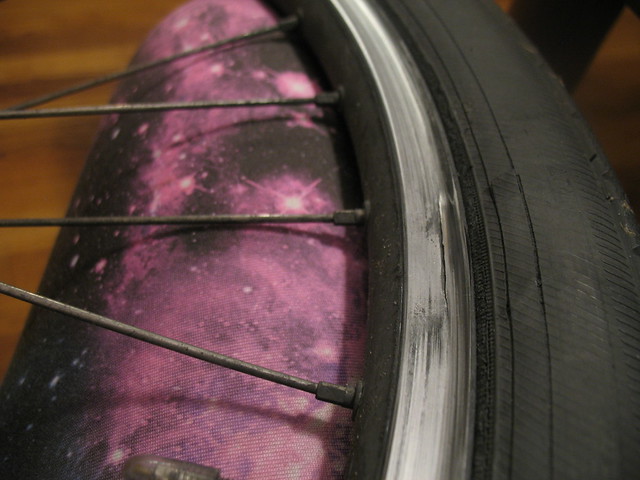 If you look very closely, you will realize this is not one but TWO sets of cracks. They are directly across from each other on one side of the rim. It would have been very dangerous to continue riding on this wheel.

When I had more time to inspect the rim last night, I discovered that the opposite side of the rim has MUCH less rim wear than this side. So now I'm really curious about what caused this much rim wear on just this one side. One possibility is that it's related to when I switched out one of the V-brakes but not the other (bolt for the other V-brake is stripped and I only just got a screw extractor kit). It could also be related to the crash and some resulting frame misalignment that the bike shop didn't catch.

I was originally worried that it was evidence of excess wear-and-tear associated with riding Frodo all winter, with infrequent cleanings (~once/week). My biggest concern there is that I REALLY don't want to have to be replacing the front wheel every 2 years, because that's going to get expensive quickly, with the generator hub and all. The fact that the other side of the rim was fine at least suggests this isn't the main thing that's going on.

Given the current state of affairs, I won't be riding Frodo again until I can get in a new rear wheel, which may take a while. So in the meantime, I'll probably see about finishing the rear V-brake replacement project, in all my free time. And then I'll just have to paranoically keep checking the new rim for wear. I'm going to be most frustrated if this is largely due to frame misalignment. This entry was originally posted at https://rebeccmeister.dreamwidth.org/1418661.html. Please comment there using OpenID.
Collapse