I'm back home again from the 2019 Royal Canadian Henley Masters Regatta. What a jam-packed event. Before this year, I didn't know that there are actually two separate "Canadian Henley" events, the first daylong one for Masters racers and the second week-long "real" one for everybody else. I'm a little disappointed to not get to watch the races for the everybody else, but at the same time I've got plenty of other things on my plate so it's probably for the best that the Masters regatta is its own fast and furious day.

All that said and done, I have heard so much about the Canadian Henley over the years that I was very much looking forward to getting to see everything for myself, and in the very least check the regatta off of my rowing bucket list. Overall, I was pleased with the experience.

The one frustrating point was with our Women's 4x. One of my teammates got sick about 2 weeks ago, probably with the same sinus infection/summer cold I contracted, and reached the conclusion that 4 race entries was probably one too many for her. So we all managed to agree on arrangements to have another teammate sub in, and our new lineup even managed to get in a really nice practice last Thursday morning. With the way this regatta is run, coaches must make changes to boat line-ups in person at the regatta office, the day before the regatta, during the posted open hours for the regatta office, to make the change official.

Well. We came to find out that the regatta organizers sent an e-mail at 5 am on Saturday, the day before the regatta, declaring that the regatta office would be closing early, at 4 pm instead of 5 pm. While this kind of seemingly trivial change might be a minor thing for a domestic crew, you have to realize that many of the coaches traveling to the regatta from out of the country are going to be in transit, driving a truck and rowing shell trailer for a good part of the day on Saturday, and are thus unlikely to be checking their email via an international phone data plan for these kinds of last-minute announcements. So the long and short of it was that we wound up being unable to change the lineups from the original, and had to change plans to scratching a different race entry if my sick teammate wound up being too sick to complete all her races.

So we had that mental whiplash to think about, on top of needing to think about all the other things that a person needs to think about while psyching herself up for a big race at a big regatta. While we were all disappointed/frustrated with this turn of events, my teammates and I are also reasonable and emotionally mature people, so we remained collectively determined to make the best of the situation overall.

Now, cue our race. This was my first heat of the morning, a 6-boat heat where the top 3 boats would advance to the final. In our discussions of our race strategy, we all felt that we would want to race well but not get too crazy so long as we knew we could secure a spot in the final. It was important to save some gas for our other upcoming races (for instance, I was in a total of 4 events, 3 with heats and finals, one that was finals-only, so that meant a possibility of up to 7 1k sprint races over the course of the day).

The weather was kind of gross, with a gusting headwind creating some chop, but this was a boat full of well-trained steely resolve, so we were determined to make the most of it. We got off to a pretty solid start, kept it smooth, and rowed well, considering the conditions. As we approached the last 250 m of the race, we could tell with our peripheral vision that we were either in first or second place. Okay, so as the stroke seat that meant that I focused on just keeping our racing strong, without trying to sprint or engage in any desperate last-minute measures. In the end we knew that we'd crossed the finish line either in first or second, having put in a solid effort.

After we got back to land, as I was waiting in line to launch for my next race with my Women's 2x partner, the officials happened to announce the official results from our Women's 4x heat. We had come in fourth. Not first or second. After a brief moment of shock, we realized what must have happened: in all the hubbub, we had forgotten to take age handicaps into account.

In Masters rowing in the U.S., in order to create a level and more fun field of competition for athletes of sometimes widely varying ages, races are usually handicapped for each year as a person gets older. Well. The handicaps for this regatta don't exactly work that way. Instead, there are flat handicaps based solely on the entrants' age category. I had noticed some of that already: one teammate who is 70 (the start of age category H) had an almost 10-second handicap over a competitor in her race who was 69 (still age category G). It turned out that every other boat in our heat had an age handicap over us of either 9 or 18 seconds, so if we'd wanted to secure our spot in the finals we would have needed to be ahead by another 5-second margin, at least.

By that point, given everything that had happened, our best option was to just try to pick up the pieces and move on and focus on our other races. And so we all did. In our Women's 2x heat, we had a tough fight but managed to secure a spot in the finals. Then we turned around and rowed back to the dock, where I hotseated (hotsat?) straight into a Mixed 2x. It was kind of a strange transition, going to a different boat and going from rowing with someone who is strong but shorter than me (with excellent control!) to someone who is much stronger than me and taller than me.

Unlike at Derby, this time we were rowing in the boat we intended to row in, I had oars with the grips that I prefer to use, and I wasn't in the middle of a caffeine-induced bloodsugar crash because I'd skipped morning coffee. We'd gotten to practice together (TWICE! gasp.), I'd been down the course twice already, and I have to say that having proper starting platforms with the starting light system is WAY more calming to me than a floating start done by a referee bringing a flag down. When we saw the green light, we were off, and while it took work to edge ahead of the other boats, by the halfway mark, we could tell that we were getting comfortably clear of the competition (also, there were no age handicaps for that race). A second spot secured in the finals.

After that third heat, I had a break until my three finals races. During the break, PM commented, "So, I don't normally compare times between heats, but just so you know, our time in our heat is definitely faster than all the times in the other heat."

So then, the afternoon. My three finals were all back-to-back races again. After eating lunch, drinking some Tang, and resting in the shade, my Women's 2x partner and I geared up and headed back out to slug it out in our final. As I would have anticipated from our heat, we had some stiff competition in our final, but managed to row smoothly in spite of being tired with the boat having a heavy feeling. Fourth place, only one second behind third.

We quickly got back to the dock, and once again I jumped out of one double and straight into the other. Here we go again. By that time in the afternoon, the gusty headwind had finally started to dissipate, and the chop of the water diminished to a point where it started to seem possible to not just tough it out but maybe even row well. So that's what we did.

That Mixed 2x final was on that higher plane again for me. Just steadily picking the boat up, getting it to move and fly along, relaxing on the recovery to minimize any disruption to the speed of the boat while coming up to take the next stroke, dropping the blades in again and driving the boat for one more stroke. And repeat. Simple. Fast. And effective.

We had a stressful hotseat from that Mixed 2x into a Mixed 4x (26 minutes between races), but you can't exactly skip the medals ceremony at a regatta like this. The officials there kindly told us that they had to wait until they received the official phone call. They did everything in their power to keep the ceremony simple and brief. Medals on, sunglasses off, smile for a quick photo, and back in the boat.

Last race of the day, the Mixed 4x. My teammate was feeling up for it, so off we went. The 4x didn't feel quite as magical as the Mixed 2x, but we left all the power we could out on the racecourse. A fight to secure third.

After years and years and years of rowing and racing, I have that giant box of rowing medals that I'm still lugging around everywhere, not knowing what to do with all the medals where I don't remember which race they even came from, or what the race was like. So many chintzy pieces of hardware.

This one, I think I'll remember. 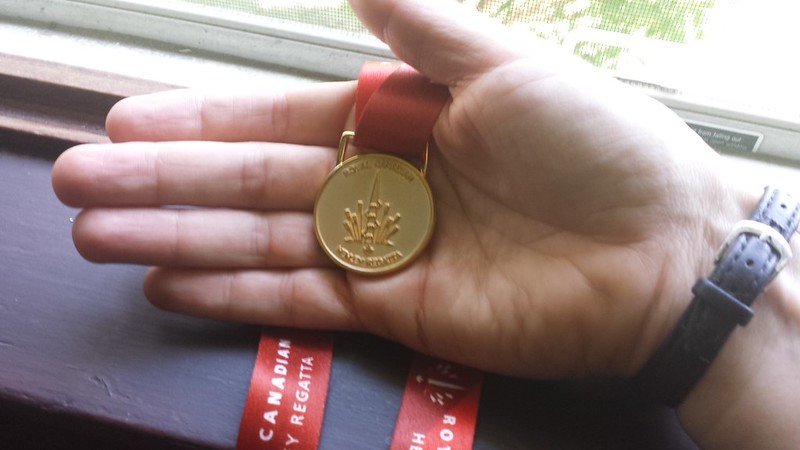 This entry was originally posted at https://rebeccmeister.dreamwidth.org/1310781.html. Please comment there using OpenID.
Collapse